Just got back from the Tom Paynter Memorial at the Iron Post in Urbana. It was great to see such a big turnout. Brad Wheeler’s quartet (with Jose Gobbo on guitar, Ben Taylor on bass, and Jeff Magby on drums) took on the task of playing several pieces from Tom’s book. Lots of musicians were there to honor Tom, including Jeff Helgesen, Josh Quirk, Ben Grosser, Erik Lund, Lamonte Parsons, and others. There were even a few sit-ins, as drummer Justin Kramer, bassist Elliott Torres and trumpeter Ivo Braun played a couple standards

Thanks to the efforts of Jeff Machota, we have a lot of new oral histories about the Table posted now.

Early Table employee Laurie Solomon, Sorgum organist Russell Cheatham, and Terry’s wife Shelley Masar have all been interview by Jeff in the last two months and posted in the Oral History area.. All three were heavily involved with Nature’s Table for many years.

Thanks to Laurie, Russell and Shelley for their insights!

Volume 12 takes us back to the early days. Jeff Machota recently received several tapes from pianist Joan Hickey, including this gem of her playing with Ron Dewar in a quintet setting. We don’t know much about the lineage of the recording, but it sounds pretty good for being 35 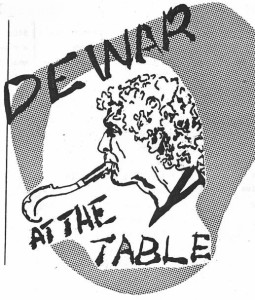 Thanks for the tapes, Joan!

Mixing/EQ done on source tape: None

Volume 11 finds us on a hot, late-summer Friday afternoon, hanging out on the Table’s front steps for a happy hour rock gig. If you try hard enough, you can smell the red beans and rice mixed with Augsburger Dark and some chips and salsa drifting out the front door along with the music.

I was hesitant to put a show of my own band in the NTAP; it just felt self-indulgent somehow. However, Jeff Machota told me The Spores were just as much a part of history as any other band, so I finally agreed. Besides, it dawned on me later, that it’s hard to ask other musicians to post their recordings of a time when they were younger and less-experienced musicians and still developing their chops if I’m not willing to post my own music of my younger, less-experienced self out there, too. In the interest of fairness and equality, here ya go.

The Spores were constantly in a state of flux. Personnel changes were always occurring; we had anywhere from six members to, at the largest, ten pieces, including a four-piece horn section (tenor and alto sax, trumpet and trombone). Our musical backgrounds came from everywhere: Jazz, Punk, Grateful Dead, Steely Dan, African, Soul. We were all over the musical map, playing the whitest rendition of tunes by The Meters, and then throwing down feedback and an African talking drum solo during the Motown classic “Respect.”

Spores gigs had this feeling of split reality. The summer of 1989 involved a lot of extremes for a few of the members, which are probably best left out of print. It was about just being in the moment, playing whatever we could muster together at the time. We worked hard, practiced regularly, and grew a lot as musicians, but the non-lethal chaos surrounding the summer of 1989 kept shows sufficiently random that you never knew quite what to expect when you got on the bandstand. It was strange that a group so seemingly random developed a following of any kind whatsoever, but we did….only at Nature’s Table. To those regular attendees, thank you.

On this hot September afternoon, our main vocalist Laura Leonardo was stricken with a flu-like crud, so she stayed at her apartment and slept. As a result, we changed our name to White Dopes On Funk for the gig and played a lot of standards and jazzier stuff we normally wouldn’t do. Four of Joe’s original tunes are on this recording: Blue Funk, Bossa Nervosa, The Ride, and Geeks For Armageddon. He knew how to write.