This tape is one of my holy grails of my early days recording live shows. If ever a tape had a pedigree, it’s this one.

I was 18 years old in March of 1986. I’d been recording live shows for about nine months and was still very much fumbling in the dark with respect to proper recording technique and mic placement. I was spending a lot of time at the Table by this point, when word came down that Von Freeman would be coming down from Chicago again for another show. 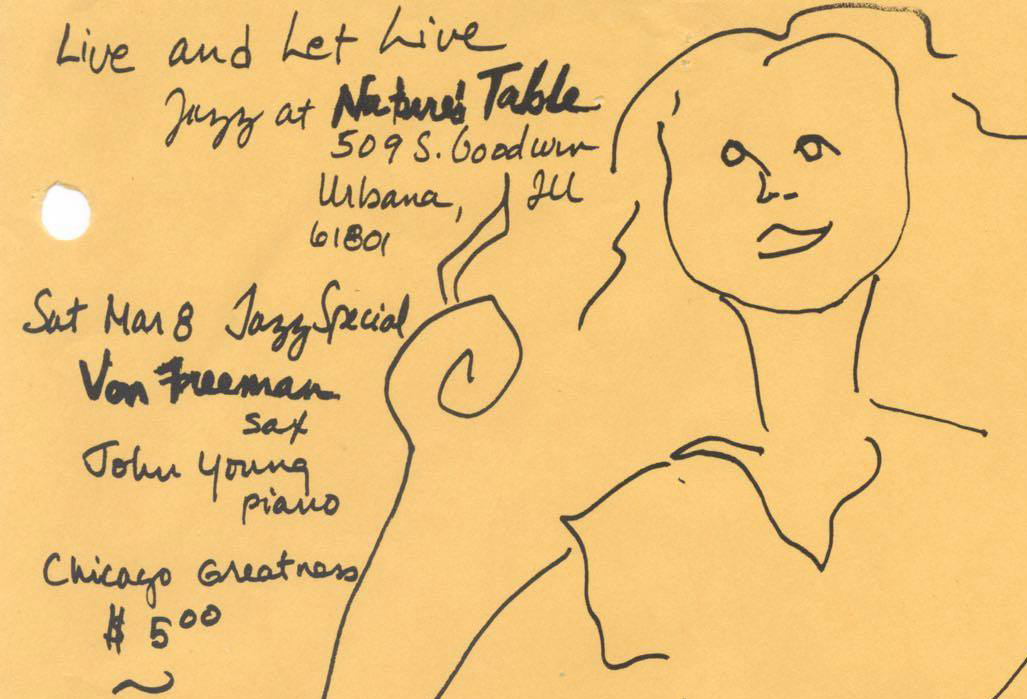 I had no idea who Von was; what I did know was everybody was making a big deal out of his appearance, so therefore it needed to be recorded. He’d been at the Table a few times before; Von knew Guido Sinclair from his time in Chicago, and Guido would get Von to appear in Urbana every once in a while. There’s another recording of Von at the Table on November 21, 1982 that hasn’t been posted… one day.

I set up my cassette deck with my little stereo mic right in front of the stage and let ‘er rip. Von was loose and somewhat informal this night, although the music is sharp. There were a TON of people in the place, packed in close. It was the most number of people I think I ever saw there. And you can sure hear them on this recording. After the show, I packed up my gear, ran home, dubbed a copy of the show for [Table owner] Terry Masar and gave them to him. He was appreciative.

At some point, I lost the masters. I don’t know when. When I asked Terry about getting a copy of the copy I gave him, he told me he couldn’t find them. My  heart sank. Every now and then I’d think about this show, but I could never find my tapes, and I’d kick myself for losing the masters.

This went on for over a quarter of a century.

After Terry died, Jeff Machota worked with Shelley to sort through some of the old Table memorabilia. I hoped the tapes would magically appear, but they never did.

In 2014, Shelley gave Jeff a box of cassettes she found in her basement. There they were. After 28 years, they had shown up, ready to be listened to. Jeff shipped them out to me in Connecticut; when they arrived, I sat down in my living room and listened to them. They were definitely rougher than I remembered…. In my mind for all those years, they were pristine, the perfect audience recording. These tapes don’t bear that out…it’s a decent audience recording, but in spots where the crowd really gets into it, it’s pretty noisy. But it’s still quite listenable.

Another interesting fact: The drummer this night was Larry Beers. 35 years later, in the summer of 2021, I played a gig with him at NOLA’s Rock Bar. Last month, when I was at Paul Kotheimer’s house listening to him digitize the tapes, I heard Larry’s name as the drummer. Needless to say, Larry was a bit surprised to learn I had a copy of this show.

So here it is…. The Ulysses of tapes, finally home after its 28-year journey of being lost. I hope you enjoy them.

Special thanks to Paul Kotheimer for digitizing them with care, and Mark Stryker’s assistance with the setlist.